We state it ad nauseum, but there’s never been a better time to get into tech.

The need for software engineers and web & app developers is so high, companies are willing to pay top dollar for fresh talent. The job outlook for these career tracks is significantly higher than others, posing an even greater growing need for professionals to fill these roles: 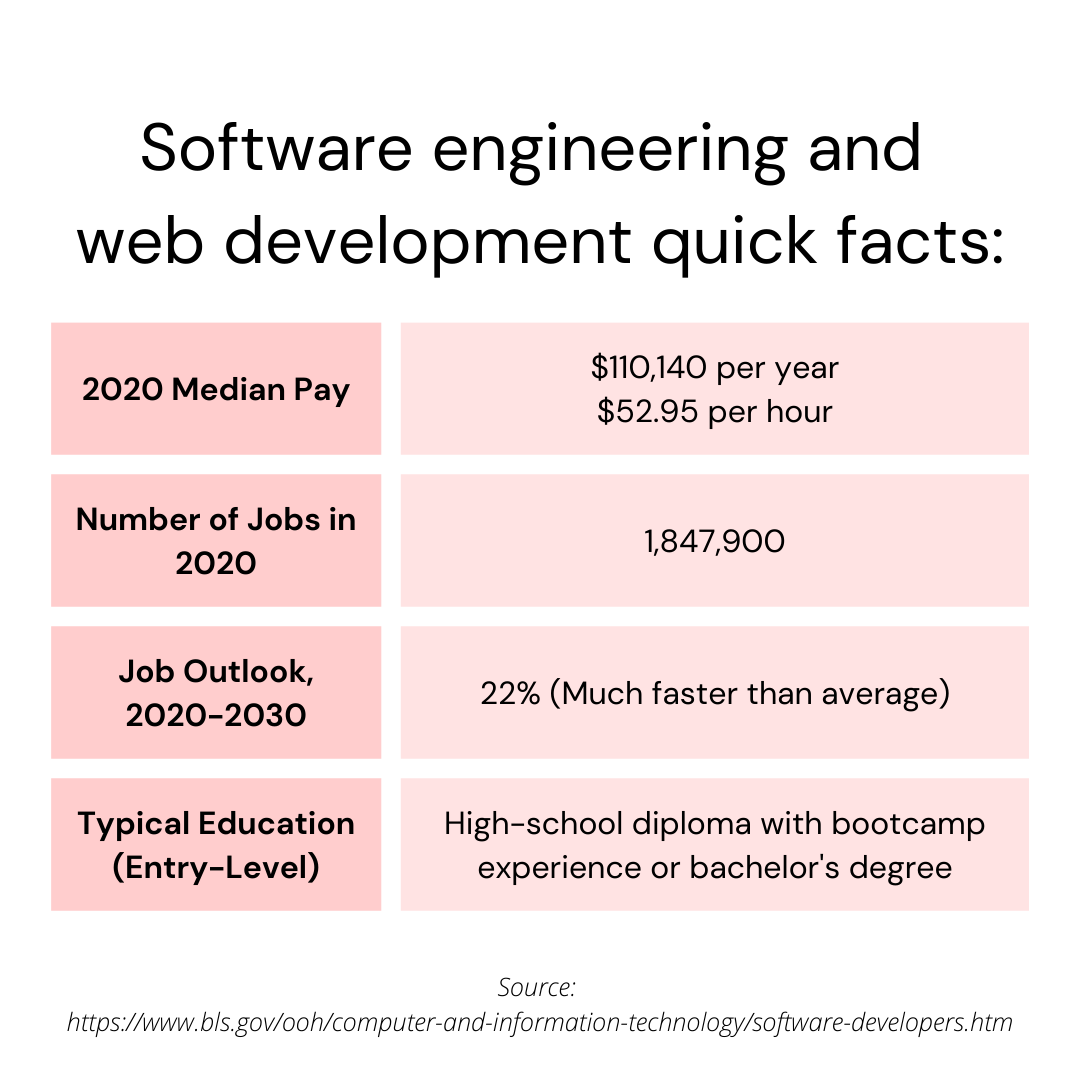 Moreover, there are a ton of ways to learn the languages and skills needed to move into a high-paying career in tech — and a number of them are free.

Free coding programs have been created from a number of outlets to meet the demand of companies needing tech professionals. Some teach different things than others, but every program’s end goal is to fill open roles.

We created App Academy Open to do just that: bridge the gap between companies and new, eager talent wanting to join the high-paying, long outlook career of software engineering. The best part? It’s free to everyone, everywhere who seeks it out.

Why did we create a coding bootcamp for free?

There are endless opportunities in software engineering available to newcomers. It was important to us at App Academy to expand access to this education to anyone who couldn’t afford traditional schooling, coding bootcamps, or other types of trade schools.

In 2018, that goal was realized. We launched App Academy Open so everyone across the world could start learning how to code. Whether you launch a career in tech or not, you’ll have the programming acumen necessary to get you a leg up in any role as it’s likely that within ten years, coding will be a must-have skill in roles even outside of tech. We first want to dispel any confusion about what App Academy Open is — coding bootcamps tend to imply there is live instruction and you’re being guided through the course.

Unlike our actual coding bootcamp programs that do just that, App Academy Open was created to allow folks to learn at their own pace, guided by video tutorials and mini projects to apply their learnings. However, because the curriculum is identical to that of our Campus Program, we want App Academy Open students to know they’re getting the same instruction and rigor of a coding bootcamp people pay for.

We have a mentorship program available at a small additional fee per month, but students often link up on Reddit and Discord to form small groups and pair program or learn alongside one another.

At present, App Academy Open contains ~1,500 hours’ worth of material. Students learn Ruby on Rails, JavaScript, SQL, React, Redux, and other relevant languages. We’re currently beta testing our Python curriculum as well for students to have an option in the near future.

App Academy Open begins with the basics, so it’s perfect for anyone brand new to coding, but more experienced programmers can find new skills to learn within its modules.

Can you get a job with a free coding bootcamp?

Of the thousands of students who have completed the App Academy Open curriculum, many have gone on to work in tech and lead fulfilling careers.

“As I was beginning to experiment with coding, I found I really enjoyed it. I was essentially coding in my free time. So I knew I wanted to pick a program that would allow me to sit with the material for as long as I wanted. The typical bootcamp pace was not one I was drawn to, but I had heard App Academy had a wonderful curriculum. It also helped that it was free!” says Fedhii IsraelMarie, who’s currently an engineer at Coinbase. “It very much made a material impact on my life, and I’m grateful that a resource like this exists to help people from a non-traditional background enter this industry.”

Faares Osman, now a software engineer at SoilFLO, was initially studying environmental and earth sciences before delving into coding while working on a thesis. “I am a strong believer in statistics (numbers don’t lie) — App Academy at the time was the leading bootcamp option to become employable based on reported employment rates and feedback from alumni which I researched extensively. I loved that App Academy Open was structured. I knew a structured curriculum would allow me to set realistic deadlines for myself as I am a very goal oriented person. Moreover, I am a believer in project-based learning. You can only learn to code by actually coding; and App Academy provided exactly that.”

Though more people than ever are learning how to code and taking advantage of free coding bootcamp resources, the demand for talent (and the money available to pay them at top tech companies) isn’t going away.

Sign up for your free access to the best coding curriculum on the market with App Academy Open!